September 6th, Nazareth House Apostolate, St. Simeon Skete celebrates its  Annual Feast of Our Lady of Nazareth, Mary, Messenger of Peace.
The following is written by Fr. Gabriel Harty, OP from his book “Heaven Sent”:
Be content – you have all you need (Heaven Sent, Fr. Gabriel Harty, Pg. 124)
Only when pressed did Fr Seraphim reveal the secret that kept him in this sacred orbit. Once when alone in his hermitage, he saw a woman standing before him. She was dressed in Eastern garb and looked most graciously at him, with her right hand raised high and in an attitude of blessing. 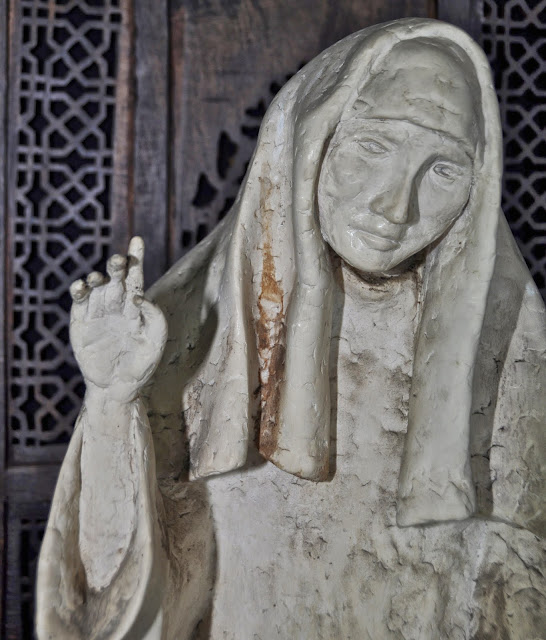 The left hand was stretched out to him and he strained to see what it was offering. It was empty, which he took to mean that there was really nothing that he lacked 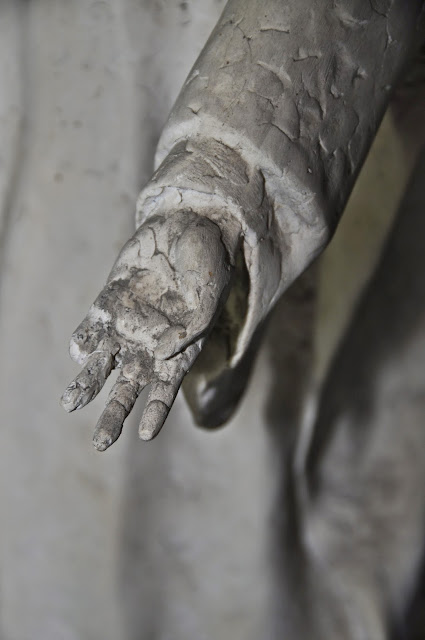 …He understood that he had all he needed and that the secret of spiritual living was to be content and to live in the present moment with the resources at hand. By way of bringing this truth home, Seraphim said that he would be content and at peace even if faced with capture and death, for he knew in his heart that with the divine grace he would have the resources at the time to accept whatever God had in store for him. When pressed about the woman who appeared so briefly in his cell, his words were: ‘I can’t call it a vision or apparition, it was all too real. She stood there a real woman of flesh and blood.’ Wishing to have an image made of what he has witnessed, Fr Seraphim realised that he could not afford to engage a fully-fledged artist. He had heard, however, of a young sculpture student, and when he met her, the first thing she blurted out was: ‘I had a dream last night that I was making a statue of Our Lady with the right hand raised and the left hand outstretched.’ I told him that he should try to contact this young lady again and have her give a written testimony relating her experience. -Harty, Gabriel (2012-05-23). Heaven Sent (p. 124 -125). Veritas. Kindle Edition. 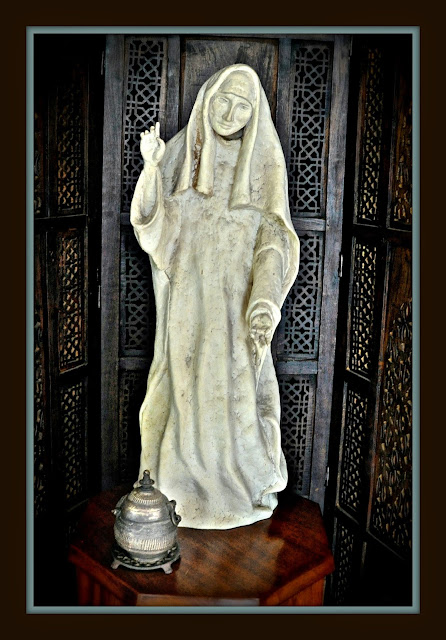 Rest for my soul
I came away from St Simeon Skete with renewed devotion to the Rosary as an instrument of evangelisation and as a grace-filled means of contemplative prayer. From an ecumenical point of view, I am glad of having had the experience, though it was not easy coping with the Divine Office of Morning and Evening Prayer plus Compline each day – much longer than ours and chanted chorally with the King James version of the Psalms and Readings. Saint Simeon Skete has given me my own ‘old Kentucky home’, for everything there confirmed my long-established appreciation of the Gospel-value that underlies our traditional Marian Rosary. Father Seraphim and his beloved wife brought me back to the words of the Prophet Jeremiah, 6: 16: ‘Halt at the cross-roads, look well and ask yourselves which path it was that stood you in good stead long ago. That path follow, and you shall find rest for your souls.’   -Harty, Gabriel (2012-05-23). Heaven Sent (p. 124 -125). Veritas. Kindle Edition. 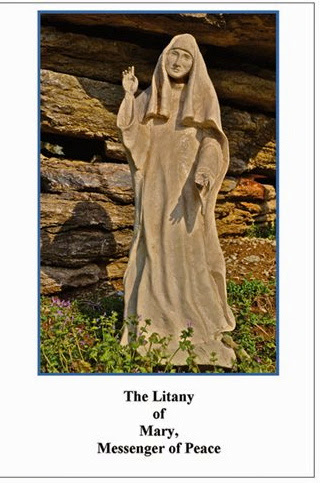 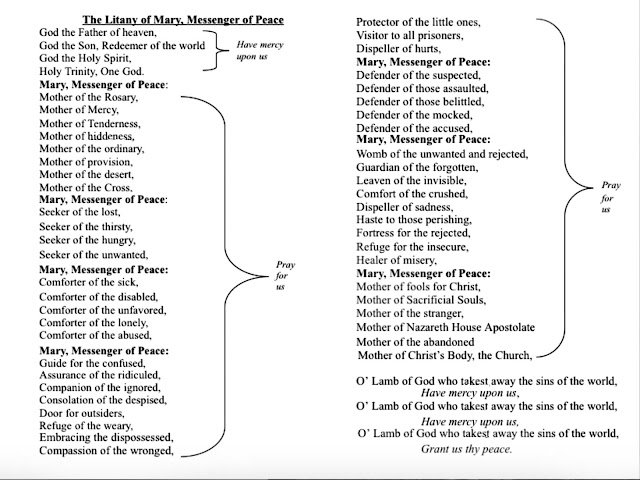 “Lord Jesus, we thank you for giving us Mary, Messenger of Peace, to be our Mother.  Great warmth fills our hearts as we take refuge in the tenderness of your Mother’s gaze; Grant that we might receive her message of peace by realizing what we have and who we are is enough, as we pray and live Your Way, Name and Life in union with Mary, Messenger of Peace.” Amen
Seraphim explains that the hand of Mary, Messenger of Peace is empty because we already have all we need to love and be God’s people. How many more churches do we need; how many more denominations do we need? Most of “religion” is the result of: not finding God; not finding Him to be enough; and not wanting Him to be enough. Much of religion is not about God, its about control and to a large degree political parties are not about good government, they’re after control.
Not finding God to be enough, not realizing we have what we need to live out the Shema (Mark 12:29-31) breeds greed and violence. Some years ago a reporter interviewing Seraphim asked “What happens if you’re captured by the rebels and shot?” Without a blink of hesitation he responded: “I have absolutely everything I need in order to be shot and killed and conversely I absolutely have everything I need to continue on living in this body.”
The essence of Mary’s Message can be summed up in these words “You already have everything you need to be a follower of my Son by doing whatever He says.” (St. Mercy Hermitage 6 Sept. 1996/ John 2:5) 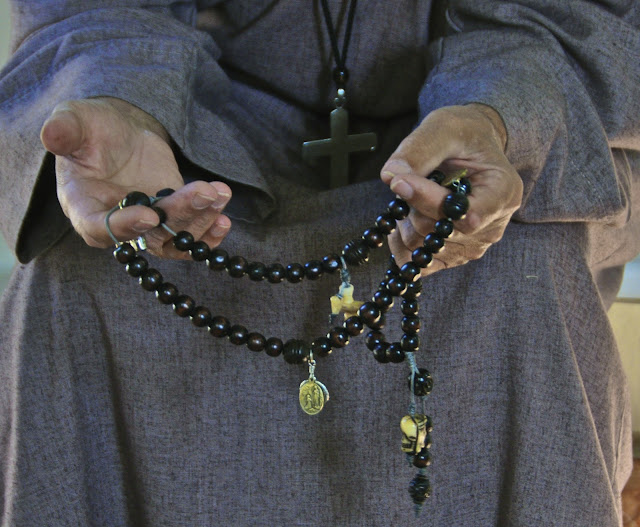 Anointing our Prayer Beads on Feast of St. Michael and All Angels  September 29

The Feast of the Beads 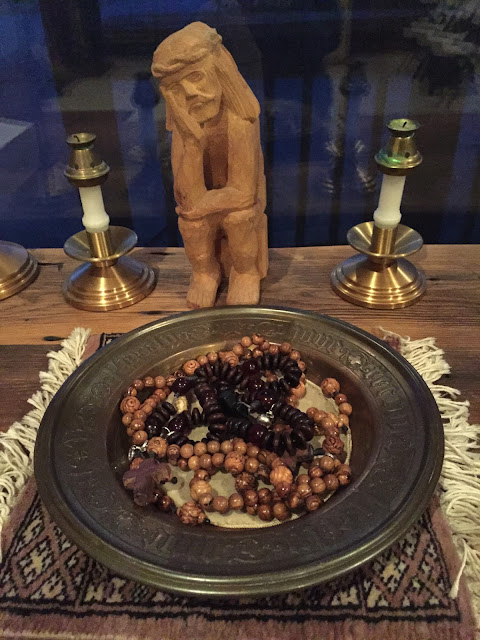 It is the custom at St. Simeon Skete to anoint our prayer ropes (beads) with sweet smelling oil on the Feast of St. Michael and All Angels because our prayers are likened as the sweet smelling incense that the angels offer to the throne of God.

Rev. 8: 1-4-
“1 When he opened the seventh seal, there was silence in heaven for about half an hour.
2 And I saw the seven angels who stand before God, and to them were given seven trumpets.
3 Another angel, who had a golden censer, came and stood at the altar. He was given much incense to offer, with the prayers of all the saints, on the golden altar before the throne.
4 The smoke of the incense, together with the prayers of the saints, went up before God from the angel’s hand.”

The angels are waiting for us to pray.  Picture in your mind, angels leaning over from heaven catching our prayers that rise as incense and quickly offering them at the throne of God. I can see them holding their golden bowls peering down at us, whispering “more prayers, more prayers.” 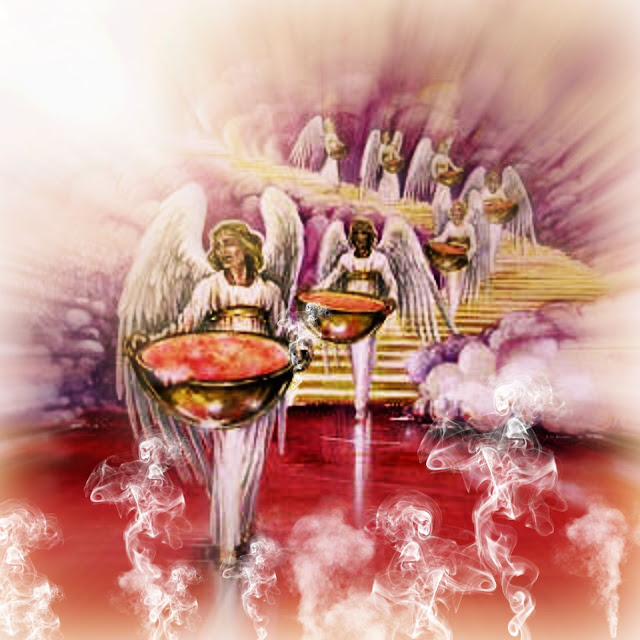 Rev. 5:6, 8 –
“Then I saw a Lamb, looking as if it had been slain, standing in the center of the throne, encircled by the four living creatures and the elders. He had seven horns and seven eyes, which are the seven spirits of God sent out into all the earth.
7 He came and took the scroll from the right hand of him who sat on the throne.
8 And when he had taken it, the four living creatures and the twenty-four elders fell down before the Lamb. Each one had a harp and they were holding golden bowls full of incense, which are the prayers of the saints.” 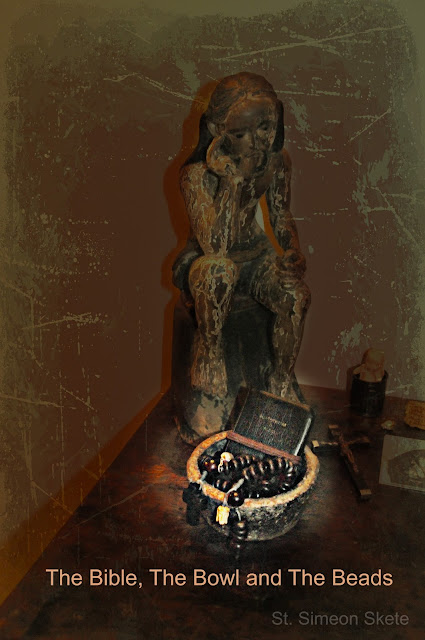 The three verities that embody the spirituality of St. Simeon Skete are The Bible, the Bowl and the Beads. 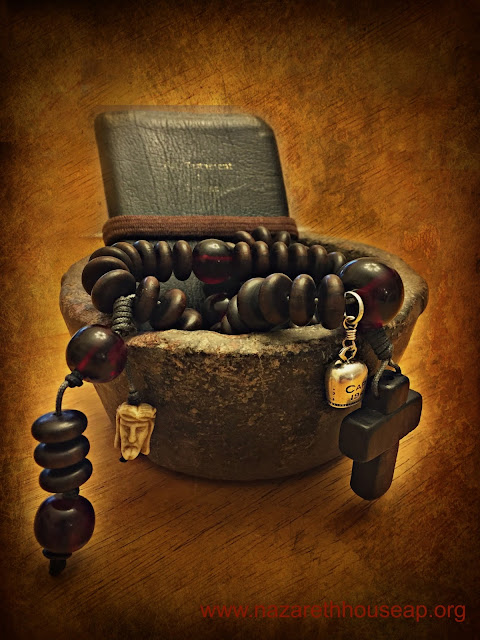 Relative to the Bowl: 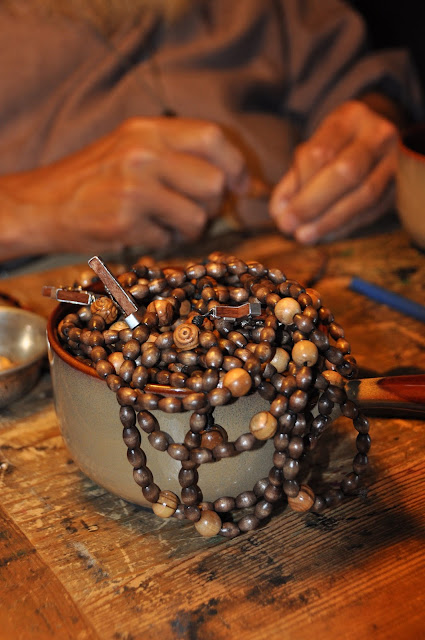 At the Skete, the anointing of our beads is known as “The Liturgy of the Beads”.   The Liturgy of the Beads is very simple and should be celebrated from time to time and not just on the Feast of All Angels.  Simply lay the beads down on table before a lit candle, anoint them with sweet smelling oil of your choice and pray the prayer of offering as you offer them to God. 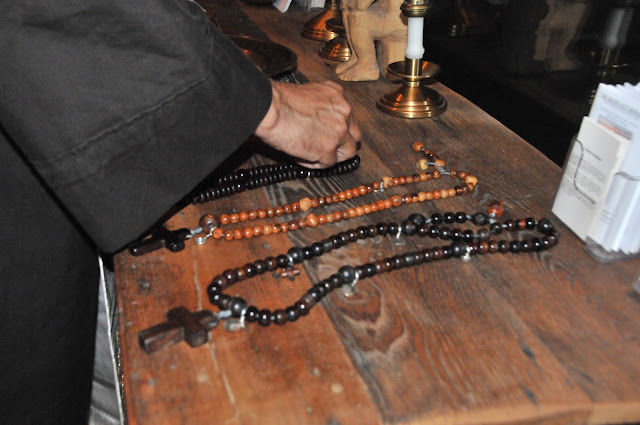 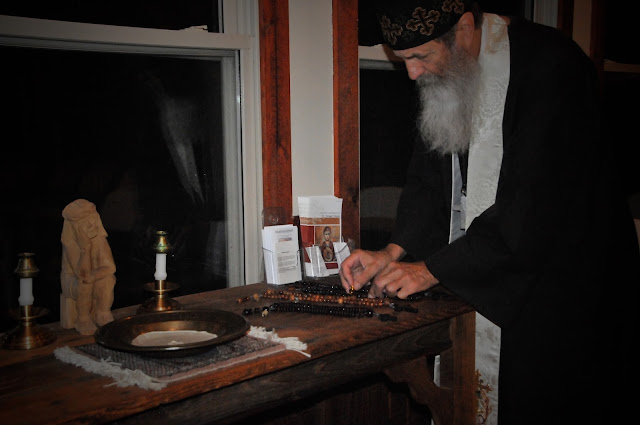 Remember, it is the prayer we say on the beads and each bead is like a little bowl holding what we offer to God.  Then say the following prayer. 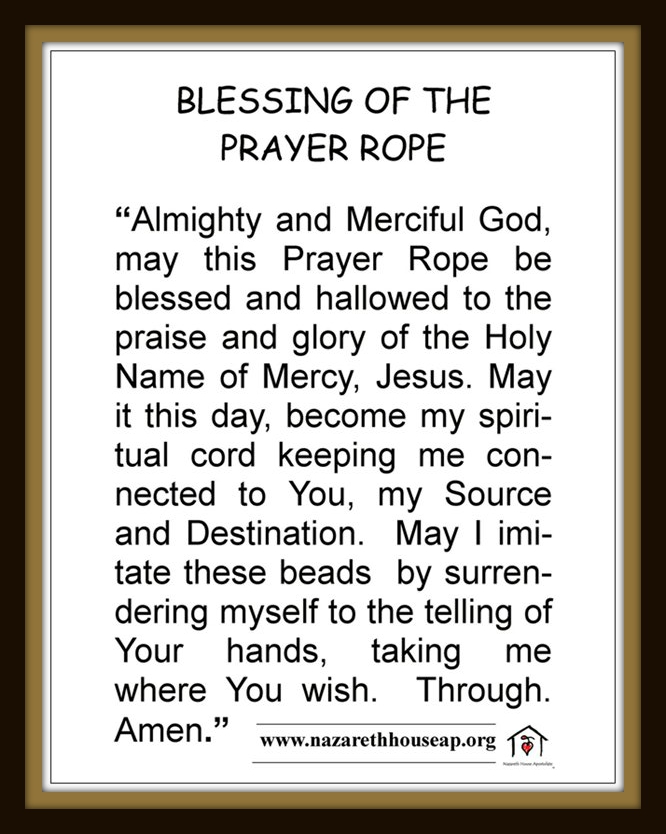